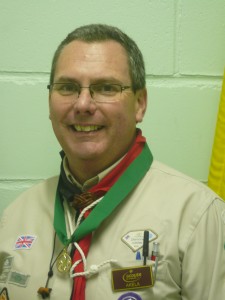 Paul Masters is the Group Scout Leader (GSL).  His main role is therefore to run the Group and he is line-manager for the other leaders.  He is also a member of the     District Executive and a local Training Advisor.

Paul first joined the Scout Association as a Cub at the age of 8 with the 1st Cobham (Surrey) Scout Group. He then became a Scout and later a Venture Scout where he gained both his Queen Scout Award and the Duke of Edinburgh Gold Award in 1982.

His first leadership roles were with the 1st Cobham Cub Pack (initially as an assistant and then as Section Leader) and the Scout Troop (as an assistant leader). He later also assisted with another Troop, 1st Hatchford Park, a specialist unit for both physically and mentally disabled youngsters.

After a break from Scouting, Paul came back into uniform with 7th Crawley in 1997 when he took over the running of the cub pack. On the ‘retirement’ of the then Group Scout Leader in 1999 he took on the additional role of running the Group. Because he also held a Cub Leader Appointment he was known as the Scouter-in-Charge rather than GSL.

However, in Summer 2012, Paul decided to complete further training and gained the appointment of Group Scout Leader but still continued with his obligations with the Cub Pack.

Paul received a Chief Scout Commendation in 2004, was awarded the Medal of Merit for his contribution to Scouting in 2008 and has been further honoured by the Chief Scout in being awarded the Silver Acorn in 2018 for distinguished service.   In 2017 Paul received the Crawley Community Inspiration Award and celebrated 30 years of adult service to Scouting.

Paul is a qualified solicitor and spent 25 years practising criminal law.  He is currently employed as an Implementation Trainer for a “top 100” firm of Solicitors based in Redhill, Surrey.  He is married with two grown up children.