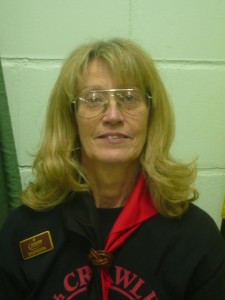 Debbie is one of the two halves of Piglits Pre-school with Rosie (Masters) and she has now been ‘playing’ with children from the local community since 1998.  Her association with the 7th started in 2004 when the Pre-school moved to its current location at the Group headquarters; she soon took on the role of Secretary to the Group Executive.  However, her involvement with the Group actually goes back much further than this.  When it was first decided to have a Beaver Colony here, back in the mid 80’s she was a regular assistant, albeit she resisted the call to join Linda and Barbara in Uniform.

As the young people in her own family unit have joined various organisations, she has been involved in chaperoning at Theatre/public events; making props/costumes and generally having fun as part of the various team efforts.  Combined with Piglits, home and study it has been difficult to add any more activities to her list.  However, as some of these other ‘hobbies’ are now diminishing she has enjoyed getting more involved in 7thgroup events, such as the project Paul (Masters) co-ordinated with the Crawley Borough Council ‘Lets Face It’ campaign and going along to help at the annual cub camps.

In September 2011 her involvement has crept up a notch – she is now having great fun as a non-uniformed sectional assistant in the Cub Section and has taken the Jungle Book name of Bagheera.  Debbie has also retained her position as the Group Secretary.