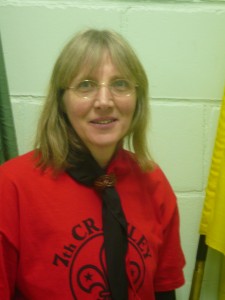 Along with Debbie Oakes,Rosie is one half of Piglits Preschool who have been associated with 7th since 2004. Rosie has been in the childcare profession since 1982 and locally since 1993. She is married to Paul, the GSL, and first had contact with 7th when their son became a beaver. This was swiftly followed by Paul becoming Akela to the cub pack. After years of being ‘support crew’ she has been persuaded to become more involved and is attending pack nights on a regular basis as an Occasional Helper, taking the jungle name of Rikki. (Rikki Tikki Tavi the mongoose).